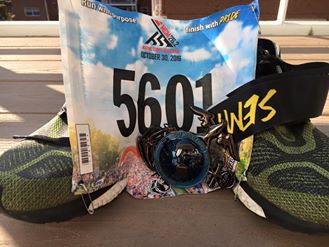 With participation levels of over 30,000 this year, the Marine Corps Marathon has rightfully earned its nickname as “The People’s Marathon.” The prize for running this famed DC staple isn’t a six-figure cash prize; instead, it’s a scenic tour of downtown D.C. and forged grit. I mention grit because many runners participating in the race are doing their first marathon and are running for a cause close to their heart.

The runners are young, middle-aged, old (Hell! There was a 76 year-old guy who has ran every single year since 1976!), veterans, gold stars families, serial marathoners and more. The event has a very military flavor – hence the name “Marine Corps” – but that’s the beauty of it. Why? The Marine volunteers are your biggest cheerleaders and the ones who will snap you out of a pity party when you are hurting.

This was my second marathon (my first was in the mountains of Northern Virginia) and I thoroughly enjoyed every minute of it. In fact, I enjoyed it so much that I set a new personal record (3:21:14). Here are some survival tips to maneuvering and thriving at this marathon:

Start slow and go with the crowd

30,000 people is daunting. You’re probably asking, “How am I going to PR with people walking and stopping in front of me?” Fear not! You will be stuck in the herd for about six to seven miles. At mile seven (Rock Creek Parkway), the pace picks up and those who are just running to survive the marathon fall-back while you pull ahead to make-up time. The pacer who is carrying a sign with the projected  finish time is a good indicator of your projected finish time should you stay with that pacer. The slow start is actually beneficial, as you will conserve energy for the middle and end of the race.

Drink Gatorade and water at every stop

This was the best habit that I developed during the race! At every stop, I forced myself to pound a cup of Gatorade and water even when I was holding my bladder for the entire race and trying hard not to piss my shorts. Do this because your body is losing electrolytes as the race drags on. Loss of electrolytes can lead to dehydration, cramps, muscle spasms and depletion of your positive mental energy that you need to pull through. I didn’t do this during my first marathon and cramped up at mile 13 last time. Despite the completion of that marathon, I was partially walking, jogging and limping. This time around, my body was hydrated and vital. This habit was also a good start to my recovery process as I wasn’t as sore as last time.

Find inspiration in the people around you

The military flavor of the marathon brings together an eclectic mix of people from around the United States and around the world. Everybody in someway or another is running for somebody who can’t run for themselves. Fathers and mothers ran for and with their developmentally disabled children in strollers; veterans from current and past conflicts ran for their buddies killed in action in Iraq, Afghanistan, Vietnam, etc.; Gold Star families ran for their service member killed in action; even cancer survivors ran to test themselves and affirm that cancer is not their master. As a healthy individual, you have no excuse to not finish when you see these people next to you or read the sign on their back containing a photo of somebody they are running for. Cultivate a mentality of gratitude that you are healthy enough to participate and respect that the person behind, in front or next to you has been through something worse than you.

I live right across the river from D.C. and am never bored running through the monuments. In fact, traffic is delayed in order for you to experience running on scenic roads that are usually clogged up by crosstown traffic. If you run this marathon and are new to D.C., you’ve picked the best day to tour by foot.

Quiet your mind and listen to the Marines

By mile 20, the pain is setting in. You’re asking, When will this race end? As the aches creep in, you’re thinking about that nice hot shower or ice bath, hearty food, a long cat nap… snap out of it! Focus on the here-and-now. As you approach the refreshment tables set-up along the road, the Marine volunteers will give you words of encouragement to not quit or that you’re almost there. These words, no matter how small, will help you tap into the famed 40% rule to finish strong at the end. The reader’s digest version of said rule: when the mind tells you you’re done, you’re really only 40% of the way through – meaning you still have 60% power left inside of you.

I can write for hours on this marathon but will leave you with these five tips. Whether you take your chance at running this gem of a race next year or run any other marathon for that matter, remember to find inspiration and cultivate a purpose to guide you through the race when it starts to suck. You’ll be a better and braver man or woman for it.

Semper Fi to the United States Marine Corps for putting on a fantastic event and for its distinguished service to country since 1775. Semper Fi, as well, to my grandfather, Private First Class (USMC ret.) James T. “Mick” Finn for your service in Vietnam and for being my reason for running this race.