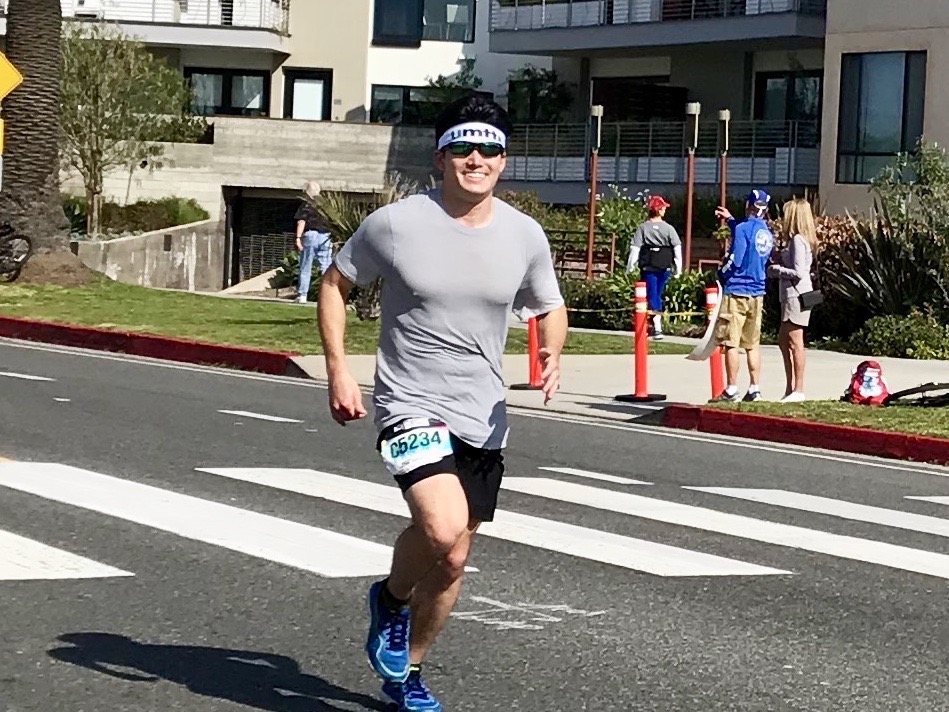 The infamous 405 highway is slow but the LA Marathon is a down-hill speed demon’s dream. From Dodger Stadium to ritzy Santa Monica, I experienced the good side of my new home city all before traffic started. But first….

The last time I ran a marathon was the Marine Corps Marathon course in Washington, DC. I was 24, weighed in at somewhere between 160 and 165 lbs, and was training for distance as opposed to speed. At 2:00 AM on March 24th, 2019, I was ready to crush my last time of 3 hours and 21 minutes. Over the course of six months, I ran almost 600 miles. Switching up my running form and focusing on speedwork paramount. The only real difference between my 24-year-old self and I: I weighed between 170 and 175 lbs. The extra weight did a number on my joints during training. The good news, LA Marathon is downhill for the majority of the race.

The race starts at Dodger Stadium which is 600 ft above sea level as the sun rises. From almost 4 AM to 6:55 AM, runners waited to get the race over with. By the time the clocked started, the first two miles were my window to set the pace. The downhill sprint afforded me the opportunity to separate from the pack.

The best part of the marathon was getting to see the different neighborhoods on-foot. In the first 10 miles, I passed through Downtown LA, Chinatown, Echo Park, Silverlake, Los Feliz, Thaitown, Little Tokyo, and Little Armenia to name a few. The cool part about these neighborhoods are the strangers who come out to cheer and greet you. The nationalities vary – African Americans, Chinese, Japanese, Mexicans, Nicaraguans, Armenians, Thais, and more. These people were generous in cheers, as well as nourishment. An entire group from a Sikh temple set up a stand to give us water, Gatorade, and oranges. A group of Mexican children set up a stand to hand out free churros, water and lemonade. Babies and toddlers gazed in awe of the runners running in the middle of the empty road. The neighborhoods of LA also showcased different musical acts to keep you amped up and your mind off the pain. Some acts included a couple of hard rock bands, a Chinese fighting dance routine that featured a dragon, hip-hop, a mariachi band, and school drum lines. The noise, the culture, and the happy faces dull the pain…only for a bit.

By mile 17 (Beverly Hills and the famed Rodeo Drive), I felt the pain sneaking up on me. For a while, I was miles ahead of the 3 hour and 15-minute pace runner. Suddenly, I heard both the pacer and the pace leader creeping up on me. They began telling us that rolling hills were coming up and to save energy with longer strides. Both men were wire-thin and built like Spartan warriors. With a beautiful backdrop, the aches and pain set-in. A knife felt like it was being jabbed into my calves and hamstrings. It was there I resolved to never get behind the pacer. I repeated the mantra for nine miles: “Heads-up, eyes open, don’t hide from the pain.” In those moments, my moonshot goal of hitting 3 hours and 10 minutes was not viable. Yet, I knew if I stayed with the pacer I would still beat my last time. The final stretch of running through Brentwood and San Vicente was a blur. The only thing I could smell was the ocean. I couldn’t even fantasize what it would feel like to reach the end. Instead, I fantasized about what it would feel like to piss my shorts (drinking Gatorade and water at every station hits the bladder). The left turn onto Ocean was where I saw the literal light at the end of the tunnel.

As I swung the corner of San Vicente to Ocean, I was going full-hog for the last mile. My Mom, Aunt and Uncle saw me and snapped a photo of me. In an after-race review of the photo, I had shot the biggest shit-eating grin for the camera. I even heard my Mom saying, “he’s not running fast enough”, so I bolted for the finish. All I remember were the knives digging deeper into my posterior muscles, people cheering, and then somehow or another I had crossed the finish line. I asked a race official, “Is it over? Did I make it over the line?” The official smiled and walked me to grab a medal. Without saying much, that was my cue that my run was over.