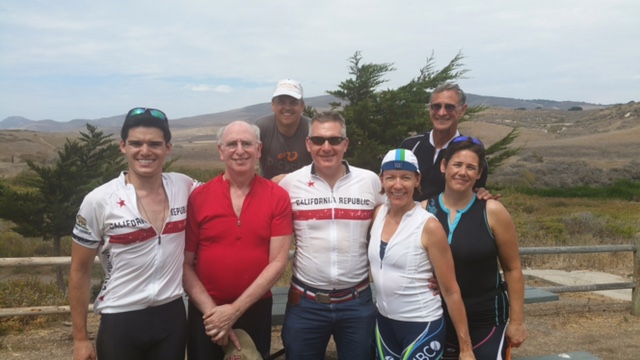 The challenge was not Big Sur. Neither was it Santa Rosa Creek or Figueroa Mountain. Instead, it was saying “until next time” to my new found friends.

The last day of the ride involved a climb of roughly 1600 feet  to Jalama Beach – a hidden beach community in the hills of Lompoc on the outskirts of Santa Barbara. Afterall the territory we had covered, this was a piece of cake.

By the fourth day of the trip, Henry, Claire, Jo, Graham, Mark, Teryk and I had become inseparable. Even when we were encouraged to explore towns like Los Olivos and Pismo Beach on our own, we chose to stick together when we ate and drank. We had become a tribe that supported each other. No different than a group of kids in a cabin at summer camp.

As I descended down the steep hills in Jalama and into the camping ground where we would have our final lunch as a group, my cyclometer read 354.35 miles. As I engaged my brakes, I felt the rubber pads kiss the metal rims. The bike began to slow down until I was at a complete stop. I dismounted my cleats from my pedals and realized my ride was over. Teryk who had already arrived with the van took the bike and prepared it for the next rider.

I felt a sense of euphoria knowing what I had just completed, however, a slight feeling of sadness and longing became to creep up inside of me. As my friends rode in, we smiled, hugged and recounted our favorite moments of the trip over lunch and cold beer.

Our discussion segued to reunion plans in New York or on another ride. It was at that moment we realized our adventure had come to an end. The ride to Santa Barbara after lunch was quiet. We shook hands and hugged each other one more time as we dropped each person off at their respective point of separation.

I rode back with Teryk and Mark back up north to San Jose where we started. It was odd to backtrack and see all of the towns we rode through in seven days. It really puts in perspective how geographically diverse California is. It was a slightly chilly night by the time we arrived in San Jose. Mark and Teryk were on their way to Eureka to hand-off the gear to another tour. We embraced and I thanked them both for their care and company. While waiting for my Uncle John and Aunt Jayne, I looked at my backpack, suitcase and the bright lights of the downtown San Jose skyline – I realized the adventure was over and it was back to reality.

3 of 3 posts. If you were inspired by my trip to take one of your own, I highly recommend booking a trip through Bicycle Adventures.